Impingement is tested during a clinical examination with the patient in a supine position on a couch. The affected hip is flexed to 900, adducted and internally rotated (see figure 1 below). Patients reporting symptoms during the exercise will have a positive impingement  test result. 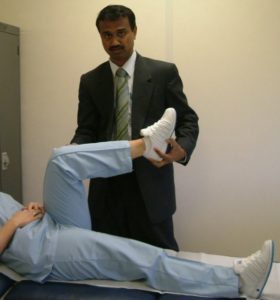 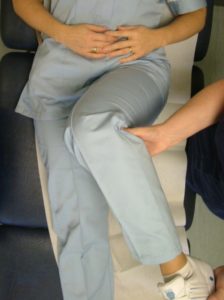 This clinical condition is further assessed by X-Rays and MRI scans.

The picture on the left shows a normal right hip, on the right shows features of bilateral hip impingement. The contour of the head neck junction is altered. 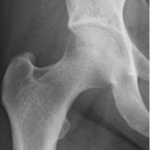 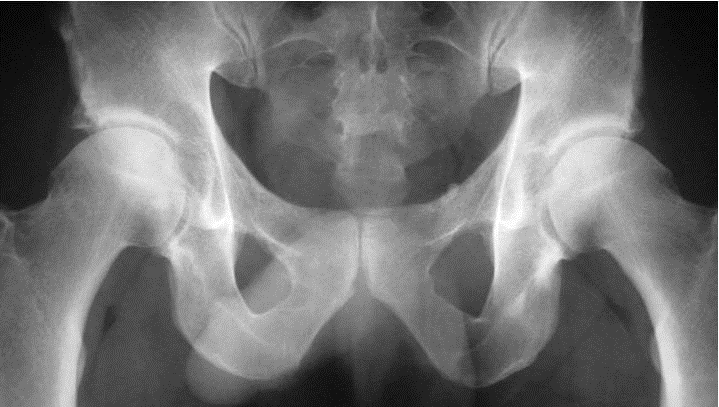 The pictures below are MRI arthrograms which show evidence of labral tear and cam impingement in the Left Hip. 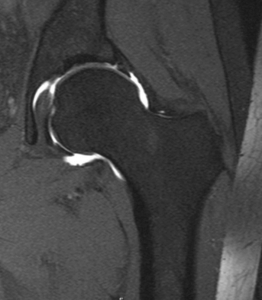 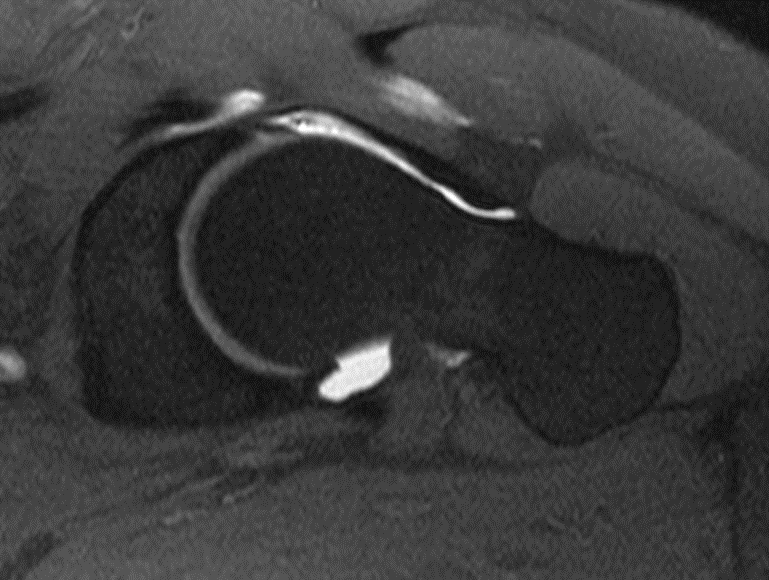 Treatment options for hip impingement include hip arthroscopy or an open procedure to reshape the hip joint. The surgery involves reshaping the ball portion of the hip joint and addressing the socket issues at the same time (see below).

Surgical results of both open and arthroscopic approaches largely depend on the pre- existing changes in the hip joint. Patients treated in the early phases of their disease do well and can return to high activity levels. A period of 6-12 weeks of  mobilisation with  the aid of crutches is advised following surgery.

The choice of treatment for hip impingement depends on the extent of the associated damage to the hip joint. In the presence of significant arthritis,  hip resurfacing/arthroplasty remains the treatment of choice.

What are the consequences of inpingement?

It is becoming increasingly well recognised that if impingement is allowed to continue unabated, it will result in arthritis of the hip joint.

Surgery is recommended only if you have groin pain and it is affecting your levels of activity and quality of life.

What are the surgical approaches?

The surgery can be done arthroscopically (key hole) or by an open procedure. The open surgery involves opening the hip and reshaping it to prevent future impingement. Any problems identified on the socket side are addressed at the same time. Keyhole surgery for hip impingement is a new approach and is only available at a few centres in  the world.

When can i go home after open surgery?

You will be allowed to go home after 2-3 days. After open surgery you are expected to  be on crutches for a period of three months. The initial six weeks will be toe touch walking and later on you will be asked to do partial weight bearing. You will be given physiotherapy during the period.

What are the complications of open surgery?

How is arthrocopy of the hip different from arthroscopy of other joints e.g. knee?

Because the hip joint is a deep seated ball and socket joint and access is difficult, the approach is still evolving. Traction to ipsilateral lower limb is employed to access  the joint. The procedure is performed under x-ray guidance.

What are the complications of arthroscopic (keyhole) surgery?

The complications of hip arthroscopy are generally related to the traction employed during the procedure. This could include transient nerve paralysis in the  leg,  haematoma in the perineal region or numbness in the perineal area.

Will i need a hip replacement in later life?

This will depend upon the extent of damage to the hip joint. If there is  moderate to severe degenerative changes in the hip joint, the chances of needing future arthroplasty are higher.

Rarely your surgeon can explain you that hip resurfacing will be carried out if the changes seen at the time of open procedure are quite advanced. This will be discussed with you prior to the surgery.